Award-winning sonic content company Sonixphere recently created an orchestral score for the new humorous TV campaign for La Quinta hotel chain conceived by DDB Chicago. Titled “Win@Business,” both 30-second spots feature company guys who aim to one up their colleagues during a company meeting by rehearsing their plan of attack the night before in their La Quinta room.

“The creative brief was to write something ceremonial and orchestral to help tell the story and punch up twists and transitions in the plots,” Greg Allan, CEO and creative director of Sonixphere says of the character-driven spots. “A lot happens in just 30 seconds, so we scored the film with peaks and valleys and builds to move things along going into a majestic feel when both guys succeed at impressing their peers.”

In Glasses, a guy struts out the gestures he’s been practicing with his eyeglasses which he thinks will make him appear decisive at the conference table. During the meeting, he sucks on the end of his glasses, and rolls out all the moves he rehearsed the night before with his glasses, now known as his “wand of business wizardry,” awing his colleagues and raising his profile from “invisible to invincible.” 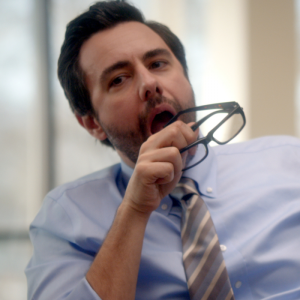 In Slide, colleagues sit around the conference table bored: someone is making a slide presentation, one girl checks her cell phone, a man makes paper airplanes. Suddenly a seemingly innocuous guy pipes up asking the presenter if he can “go back a slide.” The others freak out and VO announces that those simple four words have “tossed a mind grenade” into their dulled senses wondering what they missed. The spot wraps up with the VO tag and theme of the campaign “Book your room at La Quinta so you can prepare to win at business.”

To button up the new campaign, Sonixphere refreshed the existing La Quinta audio mnemonic with an orchestral makeover. Allan explains that the agency creatives wanted a more sophisticated tone to the music as the men rise to the challenge of becoming great business people helped by them staying in rooms and planning their business strategies at La Quinta the night before.

Shot by O Positive LLC, NYC, and edited by Whitehouse, Chicago, the film went through numerous edits before the final cut. 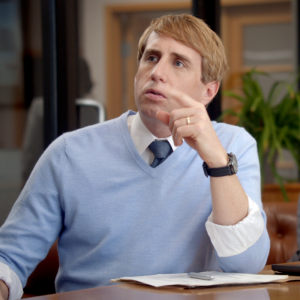 “We started the writing process working to early cuts, then worked concurrently with the agency and the edit house as the cuts kept changing and the film came back to us,” says Allan. “We’re used to being fast on our feet and were glad to help our client through his numerous presentations to his client, rescoring the edits in tight turnaround times and getting it back to the creative team very quickly.”

Sonixphere is an international award-winning total sonic content production company with a roster of composers, producers and sound designers located in Venezuela, the United Kingdom, France, the Bahamas, and Belgium and key cities in the United States. We create custom, inspired and impactful sonic content that resonates across all modern communication platforms including web, sonic branding, TV series and everything in-between..

Since launch in 2011, Sonixphere has won numerous awards including Addy’s, AAF’s, Vema, Telly’s and Communicator Awards for ad projects, and the coveted BMI Award for original TV music. We have created music for hundreds of TV shows, devised memorable sonic branding for national brands, and recently scored a long-form educational web series for our Asian clients. Our body of work (and our sound library) ranges from robust to lofty, from soothing to rambunctious, we can be as hard driving or tear jerking as you need the sonic message to be.