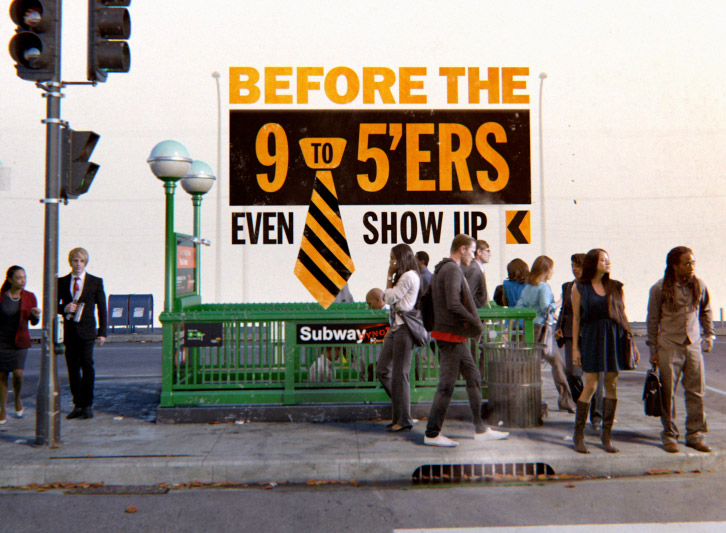 Chicago, October 8, 2014 – Sonixphere, a global resource for everything connected to music and sound, created hard hitting, tough original music for the roll out of Ford’s brand new, full-size Transit van. The campaign, entitled 9 to 5ers, marks the first time in over 30 years Ford has made a TV commercial to advertise a van. Created by Team Detroit, the package consists of a :30, :20/10, and broke nationally September 7th.

“We wanted people to know this was a brand new vehicle built from the ground up, and the music had to have that same novel quality,” say Team Detroit Creative Directors Paul Kirner and Dan Weber. “We wanted it to be hard-hitting and tough, in a continuation of the style of the longstanding F-150 Truck campaign, but with its own personality. We asked Sonixphere for demos, and to play with different approaches. They gave us many variations; the one we chose stood out and had all the hallmarks we were looking for, but it also had a fresh new energy that we hadn’t heard before.”

The creative brief called for a titanium sonic counterpart that stood up to the brisk, non-stop voice over, hit all the sweet spots, and punched up the transitions.

“The Transit project presented Sonixphere with the opportunity to batten down with agency creatives over the course of 10 months while the Transit, a totally new product, was evolving. The great communication we had with Team Detroit throughout the process resulted in a track with bite and a personality as exciting and hard driving as the new Transit,” says Sonixphere Creative Director, Greg Allan.

“Choose your instrumentation wisely,” Allan recalls briefing his composers at the outset. “There was so much action and dialogue going on in the spot that the priority was to compose a killer track that hit all the marks the client wanted emphasized, but didn’t compete with the voice over.”

Demos were submitted while Ford continued to work on the development of the Transit van. The Team Detroit creative group honed in on their favorite track from multiple demos created by Sonixphere, the winner being a fast-paced and relentless rhythmic piece fueled by bass, drums and multiple layers of guitar and synths with handclaps woven in and out of the track for added dynamics.

The film was initially edited to the actual winning demo. After additional editing, the film went back to Sonixphere, where Allan’s team finessed the music track to fit the final cut.

“The entire creative team was a joy to work with. We’re thrilled to be a part of this new 2015 Ford Transit breaking campaign,” says Allan. “We are honored that Team Detroit had so much confidence in our abilities throughout the whole 10-month process–from demos to original music. It’s gratifying to know that our clients had a great experience working with Sonixphere, and it resulted in high quality music that worked perfectly.”

Kirner and Weber add, “We loved that Sonixphere brought a range of work and that they were thinking beyond just one track. Allan and his team really listened to us and what we wanted. Because of that close collaboration, we got the distinctive hook that makes the spot sing. You can’t ask for more than that.”