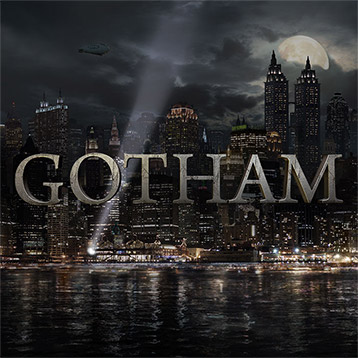 Los Angeles, Chicago – Sonixphere’s award-winning sound designer, David Van Slyke, created a unique handcrafted hybrid sound for the Gotham pilot and subsequent episodes, contributing to the authentic “wholly realized universe” in which the show exists, as noted by Hollywood Reporter in its congratulatory review of the new hit series that premiered September 22nd on Fox Channel. Emmy-nominated director/executive producer Danny Cannon (Nikita, Dr. Dred, CSI) whom Van Slyke has worked with on numerous projects since 2000 (The Cure, CSI), tapped our LA-based sound design wizard for the project based on their successful past collaborations.

“Danny wanted a supersized, over–the-top New York City-on-steroids sonic feel for Gotham,” says Van Slyke, who, due to his busy schedule, only signed on to design the sound palette for the pilot and episode 3, setting the sound design tone that would be carried out throughout the entire series. “His creative brief was to paint a raw, gritty and authentic sonic design palette evoking New York City in its darkest days of the late1980s, when crime was rampant, and to avoid a slick sound. Danny really wanted authentic period soundscapes to keep the show sounding like films really sounded in those days.”

Having worked with Cannon before, Van Slyke is very familiar with the directors’ penchant for “filling up the soundscape, to hear sounds surrounding and infiltrating the dialog—bumping up against it— as opposed to a pristine dialog track.” Using a combination of archival sounds from his late 1980s sonic work, mixed with bespoke modern sounds, Van Slyke created hybrid sounds for the show that reinforce the “…separate time and place..” in which Gotham exists, as Hollywood Reporter goes on to say in its review.

“Danny plans moments when sound can be a really big player in the story,” Van Slyke says. “He leaves moments for the sound to sink in, and that opened the door for me to really take chances.”

Van Slyke’s chance-taking ability to deliver dynamic soundscapes that enhance the storytelling—whether a full length film, TV show, or 30 second commercial—has endeared him to Sonixphere’s ad agency clients, making him a valuable resource for high-level sound design on national campaigns for such major brands as Budweiser, OnStar, and US Bank, to name a few.

Throughout Gotham, Van Slyke traverses a wide spectrum of sonic dynamics balancing period soundscapes with modern sounds peppered in for dynamics. Textural effects—tangled foreign tongues swirl around the audio track to impart an organic feel to bustling outdoor ethnic market scenes. And alternatively, there are the “New York-on-steroids” scenes where Van Slyke ramps up the tension, altering reality with big over-the-top sounds: shotguns and 38s are blown up to sound like cannons.

Improvising is one of Van Slyke’s strong suits and came into play while he was creating the audio universe of Gotham. In the many “fistacuff” scenes throughout the show, to avoid a “Hollywood” or comic vibe to the fighting, Van Slyke achieved a bare knuckle, gritty sound of fists pummeling flesh by hitting a pig carcass with a bat.

“David (Van Slyke) is a sound design force onto himself,” says Greg Allan, CEO and Creative Director of Sonixphere. “He brings a bottomless bag of sonic ideas and possibilities to each project we work on for ad clients, and his approach is completely original. David’s experience with film and TV work benefits commercials because he knows how to add impact and the unexpected to 30 seconds of film while remaining completely appropriate and making clients very happy.”

While there are “hyper-loud” moments in Gotham, there are also sensitive, quieter ones, for which Van Slyke provided standout sound design detailing. In the opening scene where a young Bruce Wayne witnesses his parents being robbed and then murdered in an alley, Cannon uses slow motion for three cuts when pearls from the mother’s broken necklace, are falling to the ground. To amplify the foreboding and extended slo mo of imagery, Van Slyke created a delicate, percussive sound— achieved by trial and error and improvisation—using a Mardi Gras necklace he cut it up and a ramekin.

“I was using the ramekin to hold the loose beads, but there was a great ring to it,” he says. “I recorded the beads dropping onto cement, and then recorded them dropping into the ramekin. In the ramekin, they made a delicate percussive sound that I preferred, so I made them slo-mo, to match the visuals, and it’s a really cool effect.”

“I’ve been working with David for a long time and he consistently comes up with new sound design solutions that blow my mind,” says Allan. “He never ceases to amaze me and we’re thrilled to be able to offer ad clients this level of artistry for their commercial projects.”