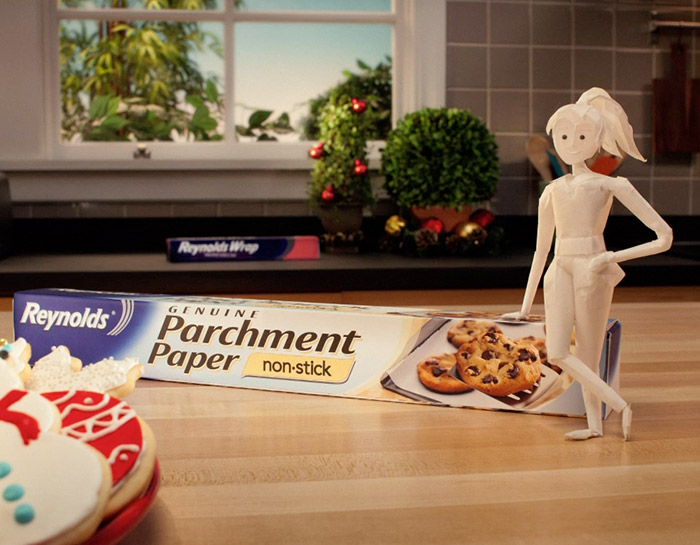 Airing nationally through the holiday season, the storyboard depicts Pepper as a sort of parchment spider-woman whose heroic actions avert a cookie catastrophe when she deploys a sheet of Reynolds Parchment Paper between a batch of cookies about to go in the oven and the baking sheet.

“Pepper Parchment” showcases an orchestral score composed and conducted by Sonixphere. Carefully plotted cues heighten the action while real strings and horns add a layer of warmth and reality to the stop-motion storyboard.

“The Havas creative team knew they wanted action hero music because Pepper is saving the next batch of cookies from sticking and breaking,” says Sonixphere CEO and Creative Director Greg Allan. “Havas producer Michael Gabriele and I wanted to use as many live musicians as the budget would allow because real instruments add an organic feel to the track. The warmth and realness of the orchestra is a nice compliment to the stop motion visuals. It was especially effective in this spot.

Working closely with the Havas WW creative team from animatic stage through final film, the musical cues were inserted at dramatic plot points to clue viewers about the progress of Pepper’s stunt-filled cookie rescue. “With only two lines of dialog, the music needed to stand on its own two feet and drive the onscreen action,” says Allan. “Our score adds a sonic sense of urgency and drama to the story.”

“Finding Pepper’s musical identity was key to the success of the spot,” explains Gabriele. “We needed the music to enhance who we saw Pepper to be and how we wanted viewers to perceive her. Greg and his composing team really made her shine. The music is truly an extension of her personality.”

Both Allan and Gabriele maintain that whenever possible, live original music is the way to attain maximum sonic branding. “Music that is composed, customized and unique to your product adds value to your brand,” Allan says. “Sweetening that with live players is icing on the cake!”

The session called for a live room large enough to accommodate all the topnotch orchestral players, so Allan recorded the track at CRC (Chicago).

“There’s an unwritten imperfection that comes with having a room full of musicians play together, that’s what makes live music sound so special. You can hear it in this track–the brass has a real bite to it, the strings have warmth. To have players on real mics and the sound of the room with a bit of bleed from one instrument to another included in the mix is all good and makes the track that much better. It definitely served this spot.”

Gabriele agrees. “From the beginning to the end, Greg’s team at Sonixphere was very collaborative and open to our ideas. They truly understood what needed to happen for us to get that real sound and they really delivered.”

Check out our latest sound design, music, TV scores, and audio branding; holler for a screening!