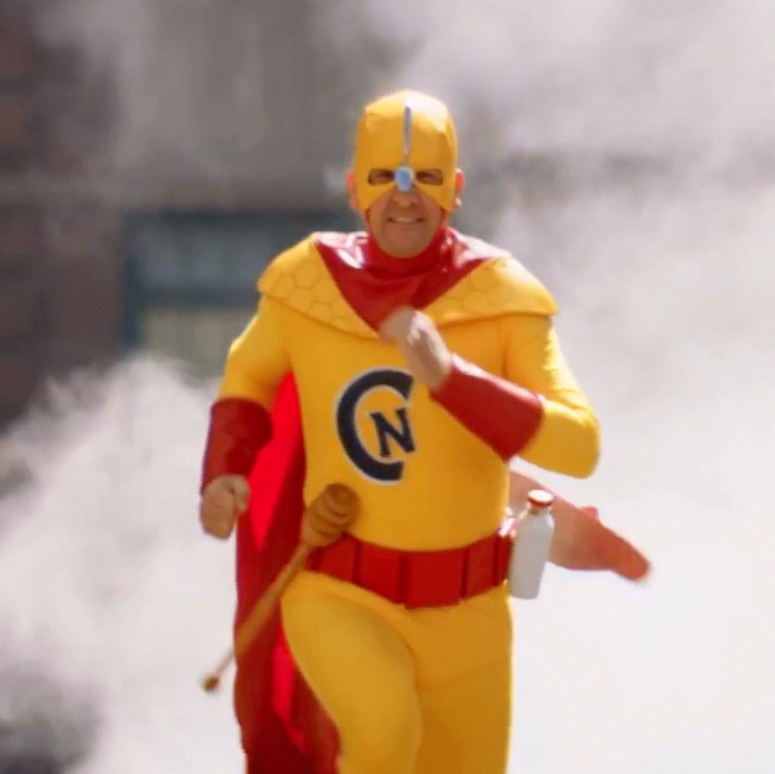 IDEA: Bored by breakfast? The Crunchy Nut is here to save you. Dreamed up by Leo Burnett for Kellogg’s Crunchy Nut cereal, the zealous masked faux superhero—outfitted in skin-tight yellow and red latex, with matching cape, belt and boots—appears out of nowhere in a plume of smoke, swings on ropes, and hands out bowls of goodness to citizens afflicted by poor-tasting villains like bran, whole grain and granola. “It’s flakes and honey and some peanuts. We don’t make any health claims on it at all,” said Burnett creative director Mike Doyle. “We thought, what if we created a character who was not so much a shill for the brand but an ambassador or enthusiast who just loved Crunchy Nut and made it his life’s mission to bring fun back to breakfast?” The Crunchy Nut does just that in a 30-second spot that launches a whole intricate and appetizing campaign on- and offline.

COPYWRITING/SOUND: The character was inspired by the old superhero shows of the 1960s and ’70s like Batman and Spider-Man. “They didn’t take themselves too seriously, even though the mission was serious,” said Doyle. “That’s where some of the humor comes from. Adam West [as Batman] plays it straight, even though everyone knows it’s kind of silly. Or look at Bill Murray from Ghostbusters—these are characters on a mission who brought drama to it based on their seriousness and dedication.” The 30-second launch spot is almost like the opening credits to the campaign. It shows the Crunchy Nut saving one guy from a bowl of oatmeal—and features a jingle whose lyrics explain the character and his mission, much like the old Spider-Man jingle did. The tagline is, “It’s super delicious.”