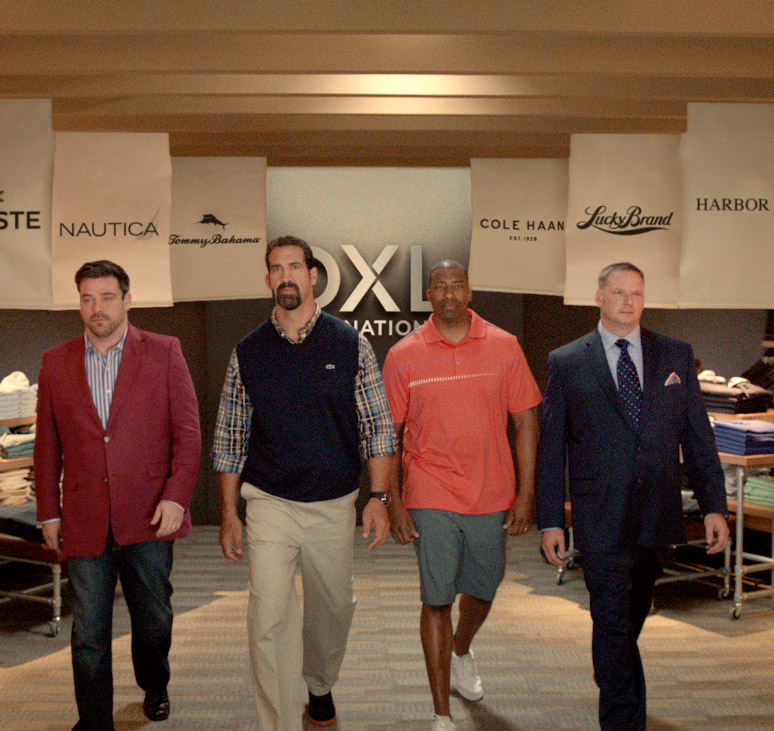 Chicago –– Sonixphere, a global resource for everything connected to music and sound, created an emotional orchestral score for Dallas-based independent The Richards Group and Destination XL (DXL) utilizing 23 live musicians playing along with programmed orchestral elements. Titled You’re Looking Good, the suite of spots consisted of a :30,:25/05 and :15 and broke nationally on April 27th. Shot by Radical Media, the film chronicles the transformation of four bigger guys who morph from being just “average Joes” into “towering icons of style,” as a result of donning stylish designer duds sold by the largest one-stop shop for men’s apparel in waist sizes 38 and up.

“The storyline shows these guys emerging from the store’s dressing rooms like warriors going out into battle,” Joey Googe, copywriter for The Richards Group. “We wanted music that had an epic, heroic feel–like music you would hear when four astronauts walk out to their rocket ship, or heroes marching forth into battle.”

Sonixphere’s Creative Director/CEO Greg Allan, The Richards Group Producer Dan Calhoun, Googe, and Art Director Rodrigo Maycotte all concurred that a highly emotional but subdued track was needed; one that would up play up the heroic and over-the-top concept of the storyboard, as well as provide a contrast to the seemingly mundane, run-of-the-mill act of trying on stylish clothes and the amazing result: instant transformation of average Joes into confident, self-assured men.

“We wanted the music to evoke a heart-swell kind of response,” Googe goes on to say, “like what happens to the people in the DXL store when they witness the transformation of these guys and recognize them as the heroes they always felt they were inside. Sonixphere’s music works in tandem with that storyline.”

To accomplish what the brief set out, the composing team at Sonixphere began by working from animatics, creating nine different orchestral demos.

“We tried to nail down where we were going to end up musically before the actual shoot days so the creative team could have a pre score to work with,” says Allan, who
launched Sonixphere in 2011.

“Early on I told Dan Calhoun that we could work magic using live musicians on top of programmed parts to make the sound that much bigger, warmer and real. He was on board with that, so a lot of our programming was done on the front end, because that’s where the flexibility lies.”

Googe agrees. “We didn’t want it to sound second rate. We wanted the music to feel heartfelt, and live instruments do make a big difference.

Once the DXL client decided which track they liked best—and it was close with three favorites vying for final place—tweaks went back and forth between Sonixphere and The Richards Group creative team. When the final film edit was done, the film was re-presented to the client, who approved the music and the programming and it was time to head into the studio add the live players.

Recording took place in Studio 4 at CRC, Chicago with members of the DXL team and The Richards group attending. Violins, violas, double basses, cellos, trombones, French horns and trumpet were isolated in separate rooms to allow for more flexibility in the final mix process.

“It was a great day, everything just came together,” says Allan. “On the seventh take, everyone in room just looked at each other and we knew that was the magical track that we would end up using. What ended up being the final music mix was equivalent of a 40-piece orchestra. By using the programmed parts to fill the track out and adding the live players on top of that, the results were amazing.”

Says Joey Googe,”We watched Greg and fellow Sonixphere composer/conductor Tony Elfers work their magic with 23 of the top musicians in Chicago. Within 30 minutes of reading the music, the players knew exactly what to do. And then under the direction of Greg and Tony, they knocked it out of the park. There had been a lot of discussion before the session about how many instruments and layers that the perfect score would need to have. And when we actually heard it, our mouths dropped. We were all thrilled, from agency to client. And it just got better from there.”